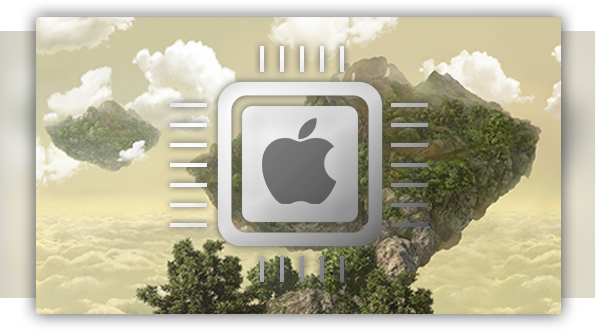 One of the most profound industry developments of 2017 wasn’t the introduction of face-scanning security features, Animojis, or the co-creator of Android releasing his own phone. Instead, it was Apple’s relatively quiet announcement in April that, going forward, it would be ditching Imagination Technologies’ reference hardware it had been licensing in favor of its own in-house designed graphics chips.

In a statement to investors, Imagination Technologies said: “Apple is of a view that it will no longer use the Group’s intellectual property in its new products in 15 months to two years time, and as such will not be eligible for royalty payments under the current license and royalty agreement.”

The move, announced with none of the glitz and glamour of the iPhone X launch, was relegated mainly to industry and financial news outlets. But the end of the deal, valued at hundreds of millions of dollars annually, brings to light why industry titans are making big gambles on a fundamental facet of modern tech: how binary bits translate into fully immersive 3D experiences in the palm of your hand.

Entire fields of computer science and academia are dedicated to solving the problems posed by digital graphics. The multi-billion dollar graphical hardware industry, led by companies like AMD and Nvidia, is staked on the fundamental process of displaying pixels across the countless screens across the world.

But with so many manufacturers in the industry, how is it possible for mobile app developers to create software that can run across the entire gamut of devices? The answer is a collection of several graphics standards or frameworks that graphics chip manufacturers agree to support.

“Graphics chips function like black boxes, from a developer standpoint,” says Zco Senior Project Manager Michael Menon. “We send instructions in, they are processed, and then the chip produces an image. We don’t know exactly what is happening within the chip itself. That is up to the manufacturers.”

The most widely used graphics APIs supported by hardware manufacturers are OpenGL, Vulkan, Direct3D, and Metal. Most manufacturers will often support more than one of these frameworks in their hardware, though some are exclusive to certain platforms. Metal was created specifically by Apple for use in its iOS, watchOS MacOS devices. And while Metal boasts optimizations for Apple’s devices, it was still being run on hardware that Apple didn’t fully design.

Unlike other hardware manufacturers that use Android on their devices, Apple has always controlled both the devices and the operating systems that run on them. This arrangement allows the company’s engineers and designers to regularly defy conventional performance benchmarks, as their devices preform better even with lower specs on paper. And while Metal solved half of Apple’s graphics equation, Imagination Technologies was still licensing them their designs. Tim Cook and company wanted more control.

Despite what initial tech commentators thought when the end of the agreement between Apple and Imagination Technologies was announced, it’sunlikely that this move into graphics hardware amounts to simple cost-cutting. The research alone that went into Apple’s new A11 Bionic chip cost hundreds of millions of dollars and thousands of man-hours. Rather, the move is seen as one that will put Apple in a position of independence from other manufacturers’ hardware standards.

“You have to consider the situation from a 30,000-foot view,” says Kyle Mallinger, Zco’s Director of Marketing. “Apple carved out their foothold in the industry by controlling the design of their software and hardware together. Metal was a step towards taking charge of their device’s graphics. The new Bionic chip is Apple taking full control of the graphics pipeline in all of their products.”

The newly announced A11 Bionic chip grants the Cupertino-based innovator full control over how their hardware is used, and will further cement their Metal graphics library as the sole framework used in iOS development. Going forward, iPhone users will quite literally see the digital world differently than virtually every other hardware user. It’s a profound concept, and it explains Apple’s initiative to take full control over how their devices display graphics, even at such a high cost.

The Impact On Developers

For all the news stories about how this will impact Apple’s stock or the sale of Imagination Technologies to a Chinese-backed equity firm, what does this move mean for companies providing mobile app development services?

“As Apple starts to release more of their devices with this technology in it, you can expect a much higher dependence on Apple’s Xcode development environment,” says Menon. “It’ll be easier to write apps that run across all Apple devices. And the performance will definitely increase on natively written iOS and macOS apps.”

The closer integration of graphics software and hardware was prominently featured at the iPhone X event, where Apple showcased AR-enabledAnimojis and a crisp, high-resolution display that will play well with the device’s battery life. Since Steve Jobs’ death, some have questioned Apple’s status as an innovator. However, as the silicon valley giant continues to consolidate the technologies that support its phones, its ability to buck industry standards and norms will only increase.

“A lot of the industry looks to Apple for what’s coming next,” says Mallinger. “They killed the headphone jack, and people were angry. But then Samsung and even Google followed suit. This move is going to free them from having to deal with other companies’ standards and limitations.”

It’s not immediately clear if other companies will follow suit, primarily because the process of custom graphics chip design is so capital intensive. But what is clear is that Apple’s fraught breakup with Imagination Technologies will shape their products for decades to come.